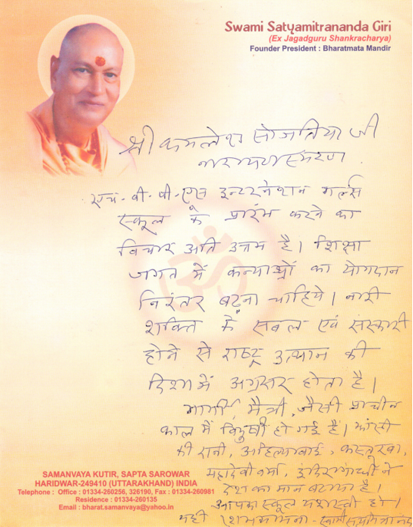 Swamiji was born on the 19th September 1932, on the day of Ashweeja Krishna Chaturthi, in the city of Agra. His father, Shiva Shanker Pande who was a teacher, and his mother Triveni Devi both came from devout Brahmin families and they named him Ambika Prasad.

During his early years Ambika Prasad spent most of his time with his doting maternal grandparents, where he became absorbed in Satsang and Prayers. Around this time a sage who was visiting the house saw this charming boy and predicted that he was destined to perform a great service to humanity.

From childhood, his parents noticed that Ambika Prasad had a unique spiritual quality. On one occasion when the young boy was visiting a temple one evening he became immersed in a spiritual trance and had a vision of the Lord with whom he travelled on the sacred Garuda Viman. The Lord had blessed him. Since this time Ambika Prasad became deeply involved in the spiritual world and Satsang. At such a tender age the boy also began to display a natural flair for poetry which was inspired in him whilst in a state of Bhavsamadhi. The local Journal of Poetry, Sukavi, published his work thus making him their youngest poet ever.

Ambika Prasad proceeded to study in a Sanskrit school in Kanpur, where he studied the language and its literature leading him to a Gurukul which taught him both Hindi and Sanskrit. He studied the Vedas and modern education and passed the M A degree examination at Agra University. Ambika Prasad also acquired a degree in Sahitya Ratna, the highest degree in Hindi language and Literature and came under the influence of the famed scholar Shri Purushottam Tandon. His passion for learning earned him the coveted degree of Shastri from Varanasi Vidya Peeth.

At this point in time Ambika Prasad decided to take the path of Sanyasa. In Rishikesh he came into contact with the revered Swami Vedavyasananda, who accepted him as a disciple, conferred Sanyas and named him Satyamitranand.

As a Sanyasi, Swamiji continued to serve humanity and lead them to the path of spiritual enlightenment and peace, thus continuing the mission started by Swami Vivekananda.

Travelling to all corners of the world including Africa, England, Germany, Switzerland, Holland, USA, Canada, Australia, Japan, Indonesia, Malayasia, Hong Kong, Thailand, Singapore, Fiji, Mauritius and the Phillipines, where various centres of learning and worship have been established. It’s his gift of a deep spiritual experience and a power of the most effective oratory that has drawn thousands of loving devotees to him.

Samanvaya Kutir at Haridwar and the Samanvaya Sewa Trust have been established by Swamiji. Samanvaya Kutir has many amenities, including a Satsang Bhavan, mobile dispensary, library and residential accomodation with modern facilities. Visitors to the Kutir may study, meditate, learn Yoga and participate in spiritual discourses during their stay. Beside the Samanvaya Kutir, on the banks of the pious Ganges, stands the unique eight storey Bharat Mata Mandir.